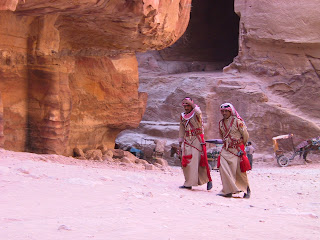 "Amjad asked if this was my first time in Jordan, a question I remembered from my last trip, along with the familiar honorific ‘seer’ and the faint reek of cigarette smoke. He was delighted when I replied no, I had been before. The stands of trees flashed past, the brown land dotted with pale stone-clad houses and patches of cultivation. Every few hundred metres, someone at the roadside hawked steaming canisters of coffee or great bunches of radishes, rows of gleaming beef tomatoes and stacks of huge, green and yellow mottled watermelons."
Olives - Page 3


When I arrive in Jordan, I'm invariably met at the airport by one sort of driver or another. They're usually hotel transfers, occasionally have been more exotic (once a Royal Court silver Mercedes with a soldier in attendance - it would have been more impressive if the rear wasn't filled with particularly voracious mosquitoes) but always ask the same question.

"Is this your first time in Jordan, seer?"

The seer is 'sir' as she is pronounced. My answer is currently, "No, my sixty-ninth". That does for 'em, I can tell you.

It's not really my fault - I wasn't counting. The Grand Hyatt was - and presented me with a wee book and letter from the GM to celebrate my 40th stay. That was the week after the Amman bombing, when the hotel contained the grand total of 16 guests and the lobby was blanked off, the appalling damage and bloodshed behind the plasterboard left to the imagination - and to those of us who had been sent the thoughtful viral Powerpoint that did the rounds, at the time, of the carnage the Hyatt bomb had caused.

Olives was originally written before that bombing, in 2004 and yet almost presciently predicted bombs in the one country in the whole Eastern Mediterranean to have enjoyed security since the tumultuous events of 1948. It's a grim thing to have predicted.

And yet nobody knew of that prediction, precisely because nobody wanted to publish Olives. Today, I can agree with the early refusals. The late ones, I find harder to take.

Olives is, ultimately, about Jordan. About the Jordanian people, about the place they live in and the events around them that shape their lives. And if you're interested in those things, or want to find out more about the background to the book itself, this is my attempt at fleshing out the question marks it raises and also at answering questions readers raise.

So, from a foreigner, this is a blog about Jordan. 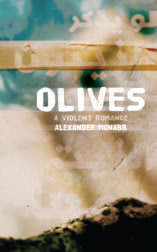 How to get Olives

Get Olives for yer iPad here.

Get Olives in paperback shipped FREE to over 100 countries for £9.98 from The Book Depository!

The Print Edition of Olives is available in the US on Amazon.com

Olives for the UK Kindle is here.

The US Kindle edition of Olives is here.

If ya gotta Nook, Olives is on Barnes & Noble here!

Olives is on Kobo here too!

Other e-reader formats are available for download from Smashwords here. You can also find it here on GoodReads.

Olives is on sale in Jashanmal bookstores, Spinneys and other fine retailers throughout the UAE and Bahrain as well as in Lebanon.

Sadly, it cannot be sold in the country in which the novel is set, Jordan, as distributors refuse to handle it due to a difficulty telling fact from fiction.